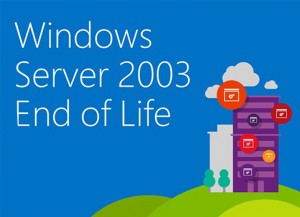 Much like XP, as of July 14th 2015, support for Windows Server 2003 will end. This means that there will be no patches or security updates after the July deadline, putting any unprepared businesses at risk.

HP has estimated that there are currently 11 million systems in use globally.

As well as security issues; failure to run businesses on a supported platform can also lead to a plethora of compliancy issues. For example, ecommerce websites are specifically required to run on a supported platform, or they run the risk of being declared uncertified and will be unable to process credit card information, halting their handling of business.

Security risks aside, failure to replace systems by July 2015 could be costly, with Microsoft themselves estimating that custom support could cost in the region of £120,000 per year for those who haven’t heeded warnings.

Start considering the best migration decision for your business today and take advantage of the current timeframe. Call us for more information and advice on your options. Midland Computers IT Support based in Shropshire…Everything IT.