Meltdown and Spectre exploit critical vulnerabilities in modern processors. These hardware vulnerabilities allow programs to steal data which is currently processed on the computer. While programs are typically not permitted to read data from other programs, a malicious program can exploit Meltdown and Spectre to get hold of secrets stored in the memory of other running programs. This might include your passwords stored in a password manager or browser, your personal photos, emails, instant messages and even business-critical documents.

Meltdown and Spectre work on personal computers, mobile devices, and in the cloud. Depending on the cloud provider's infrastructure, it might be possible to steal data from other customers. 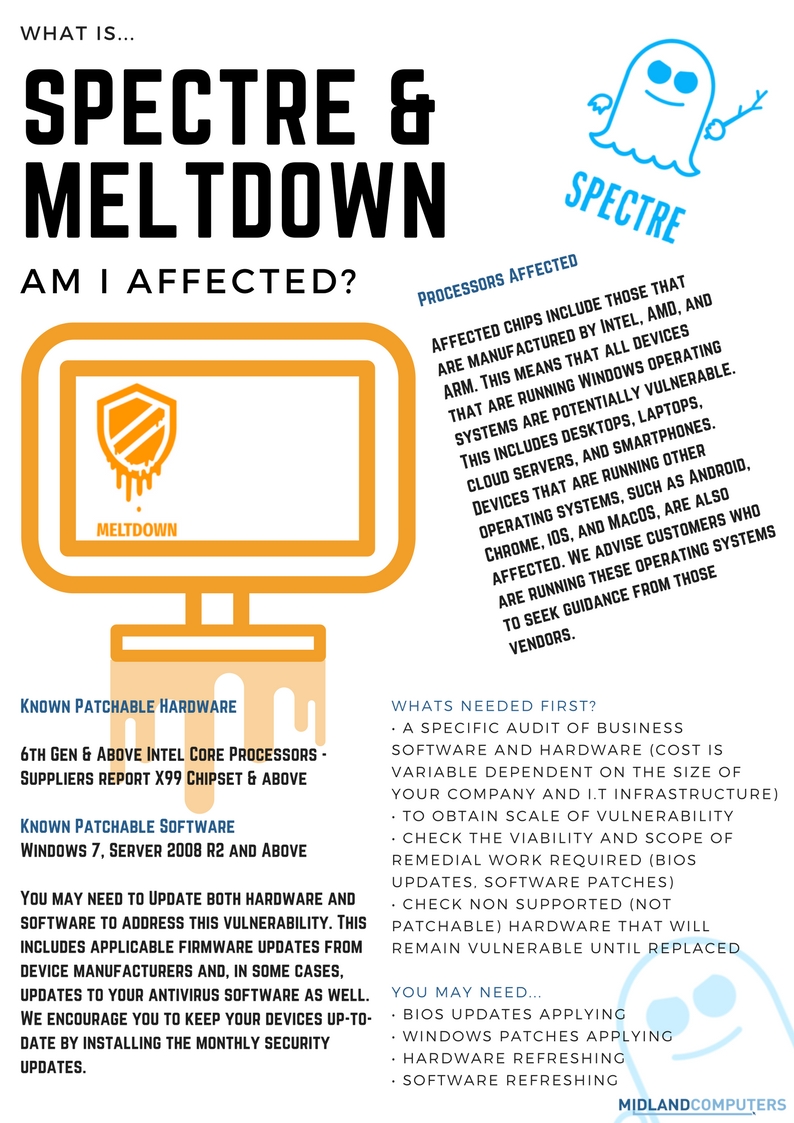 Am I affected by the vulnerability?

Can I detect if someone has exploited Meltdown or Spectre against me?

Probably not. The exploitation does not leave any traces in traditional log files.

Can my antivirus detect or block this attack?

While possible in theory, this is unlikely in practice. Unlike usual malware, Meltdown and Spectre are hard to distinguish from regular benign applications. However, your antivirus may detect malware which uses the attacks by comparing binaries after they become known.

What can be leaked?

If your system is affected, our proof-of-concept exploit can read the memory content of your computer. This may include passwords and sensitive data stored on the system.

Has Meltdown or Spectre been abused in the wild?

Which systems are affected by Meltdown?

Which systems are affected by Spectre?

Almost every system is affected by Spectre: Desktops, Laptops, Cloud Servers, as well as Smartphones. More specifically, all modern processors capable of keeping many instructions in flight are potentially vulnerable. In particular, we have verified Spectre on Intel, AMD, and ARM processors.

Which cloud providers are affected by Meltdown?

What is the difference between Meltdown and Spectre?

Why is it called Meltdown?

The vulnerability basically melts security boundaries which are normally enforced by the hardware.

Why is it called Spectre?

The name is based on the root cause, speculative execution. As it is not easy to fix, it will haunt us for quite some time.